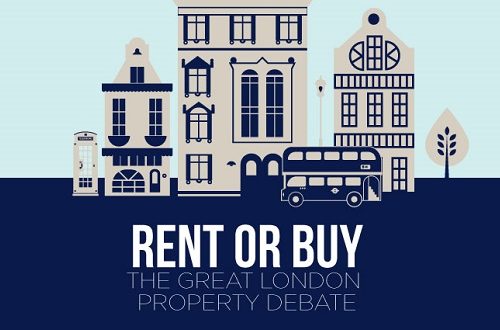 31% of UK Millennials own their own home

This is a guest article from  Douglas and Gordon

A case for both renting or buying in London can easily be made. Douglas and Gordon explore which options first-time buyers should be aiming for.

With such polarised opinions on which option is smarter financially, economically and in the long-term, deciding whether to rent or buy is a difficult decision for anyone stepping onto the property ladder for the first time. But despite an increase in people choosing to rent, buying may actually save you money over time.

Renting can be a worthwhile option for anyone needing flexibility, and with the high transaction costs of buying, mortgage fees, stamp duty and more, renting is also easier on the budget over the short term. However, according to a study on buying versus renting done for the International Review of Financial Analysis, an “increases in inflation and imputed rent top the balance in favour of ownership”.

Gap between buying and renting is narrowing

Despite a growing rental market in London and rental costs more affordable across more than half of British cities, data suggests the gap between buying and renting is narrowing.  Halifax data shows that buying is financially better for first-timers in the long run as those looking to enter the property market can save up to £651 a year by buying rather than renting. The gap between the cost of buying and renting has narrowed by £19 a month since 2016, which is largely due to the rise in house prices for first-time buyers.

House Prices in the UK continue to grow

Property prices in the UK have risen by 5.4% compared to last year, with the average property price in London increasing from £472,718 in December 2016 to £483,568 in September 2017 according to the UK Land Registry. On the other hand, average weekly earnings for employees in Britain fell by 0.4% in the last year.

The Number of renters has more than doubled in London

According to trends, more people are opting to rent in London than buy. Data from the Parliamentary Research Briefings between 1996 and 2016 show that private renting has more than doubled, while the growth of owner-occupied homes has been much slower.

This is largely due to property price increases rapidly outstripping average wage growth and the fact that many first-time homeowners are unable to save enough for a deposit, with the average deposit for a London property being £94,088. As a result, the age of people entering the UK property market for the first time is highest in the capital at 32-years old while research shows around 29% require help from parents to pay a deposit.

31% of UK Millennials own their own home

Research by HSBC, which studied over 9000 people in nine countries, revealed that four of every ten millennials own their own home. China ranks highest with 70% of millennials owning a home, compared to 31% in the UK.

Douglas and Gordon analysed average property and rental prices from data.london.gov.uk and calculated how much mortgage repayments would be over 25 years at 2.5% interest with a 10% deposit (see table below)

Founded in 1958, Douglas & Gordon started life in Sloane Square and has since then opened 17 offices across central, west and south-west London, providing the city with exceptional service. Our respected reputation is thanks to our focus on providing a cutting edge, innovative customer experience, supported by the most professional agents in the market.