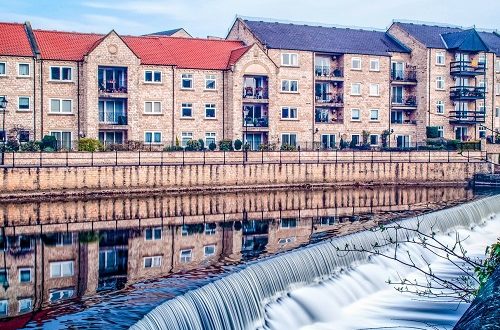 Market Towns up and down the country are popular places to live for all ages. Not surprisingly they command premium prices. As an aside, not all towns are market towns. A market town requires a charter to hold markets, some sadly no longer hold markets.

By definition, a market town needed a charter to hold a market. Royalty historically granted the charters, many dating back a thousand years to William the Conqueror’s time. Not all market towns still have markets, but the legacy lives on. With long histories, many have centres with listed buildings, wide main streets or market places making them visually attractive.

Market charters were only granted to places without another market close by, they were limited. As a result, market towns came to dominate their surrounding areas, becoming the centre of commerce, entertainment and local government, something still evident today. It’s rare to find two market town less than about 7 miles from each other.

Increased car ownership and the changes to employment and to shopping habits in the latter half of the twentieth century had a profound impact on many towns. Traditional employment was lost, many lost their railway stations and other services, younger people left for better employment opportunities. Compared to the decline of our industrial cities, they fared better, local wealth and civic pride helped a lot. Villages, many losing all services also did worse.

It would be wrong to use the term recovery, as most Market Towns only slumbered rather than declined. Market towns within commuting distance of major centres of employment became increasingly popular towards the twentieth century. Developers were quick to realise, the potential, selling a lifestyle along with the home. The town dwellers may not have been too keen on the new estates being built on the surrounding fields, but this bought wealth into the towns supporting and saving services.

Rural market towns, many of which are picturesque are also doing well, attracting well-heeled retirees, home workers and new businesses. Market towns are popular places for the new generation of artisans, whether they be brewers, cheesemakers, bakers or something else. Some have become destinations for foodies, fine diners or collectors etc.

Up and down the country, market towns are popular. Access to essential services close by being popular with families and those a bit older. Being able to walk to the pub, a restaurant and the shops gives a key benefit of city living but with the benefit of cleaner air and access to countryside. Strong civic pride also keeps many looking good despite cuts to local council budgets. Local clubs and societies exist to cater for many interests.